Can I use my printed grocery coupons at any supermarket?

Help Center > All About Coupons

Oftentimes the confusion with grocery coupons comes when you print out a coupon, only to find the words, "Redeemable at", "Available at", or "Only at" clearly printed on the coupon. Here is what this would look like on the printed coupon:

This wording is simply a suggestion or a recommendation, rather than a restriction. It is also a way for the manufacturer to let you know where the product can be found. Ultimately it comes down to the fact that it is a manufacturer coupon (it will say so on the top of the printed coupon) and can be redeemed anywhere that accepts manufacturer coupons.

Only at coupons are the restrictive ones. This wording means one of two different things. Either the product the coupon is advertising is only available for sale at the store that's listed (for example Equate products are ONLY available at Walmart), or you can only redeem the coupon at the store that is listed. In the latter of the two instances, the offer text should also indicate the store restriction (i.e. Save $0.75 on two jars of Ragu Pasta Sauce at your local Safeway).

As previously mentioned, the majority of coupons avialable on CouponSurfer are manufacturer coupons. But you should also be aware of and take advantage of store specific coupons. When used in conjunction with our manufacturer coupons (also known as stacking), you will save even more! Store coupons will be clearly marked as such on the top of the coupon, exactly like their manufacturer coupon counterparts. Here is an example of each so you can see the difference: 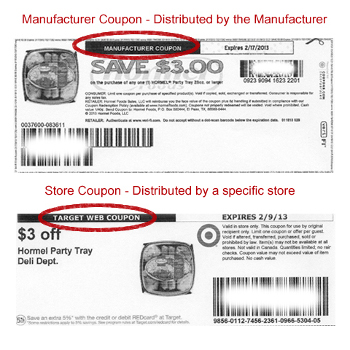 In this example, you would save a whopping $6 on a single Hormel Party Tray from Target because you are able to stack both $3 coupons. Just another way to save even more on your groceries!

Regardless of the wording used on a coupon or the type of coupon, your ability to redeem any coupon at your store comes down to their coupon policy, so become familiar with your stores policy. Most stores will have their coupon redemption policy readily available on their website. Here are a few for some of the larger stores:

Was this answer helpful?